The Scottish Borders is famous for its castles and its cashmere, for the lovely Tweed valley, medieval abbeys, Sir Walter Scott’s baronial home and the romantic Border Reivers (rustlers). Combine this with a visit to Hadrian’s Wall and Alnwick Castle, (Harry Potter films) … and we have a sensational five day tour!

Included are Flodden battlefield, site of Scotland’s worst defeat, Teviothead where the flamboyant reiver Johnnie Armstrong was hung by his king, luxurious Floors Castle, seat of the Dukes of Roxburgh, and a look at grim Hermitage Castle. You’ll also witness unique and colourful spectacles such as the Hawick Common Riding (dates from 1703).

Each tour is for a maximum of seven people, travelling in a nine-seater minibus. Dates are flexible. The tour can be arranged at any time of year, and can also be adapted if you wish to drive yourself. The following outline assumes an early June trip to coincide with the Hawick Common Riding, but alterbatives can be arranged.

The Eildon Hills from Scott's View

The general outline of the tour is as follows…

After a comfortable night at a chic Edinburgh B&B, your tour guide collects you and you head straight for Peebles, a charming market town on the Tweed, full of small independent shops and, just outside it, Neidpath Castle on its cliff.

Following down the Tweed we stop at Traquair, the oldest inhabited house in Scotland; always a Jacobite house, its ‘Bear Gates’ will remain closed until a Stuart is again on the throne. A little down the river is Abbotsford, the exuberant and fascinating home of Sir Walter Scott. Then to Selkirk and Lochcarron weavers. Next we visit 13th century Melrose Abbey, where the heart of Robert ‘The Bruce’ is buried.

We reach our St Boswells hotel in good time to settle in, then hear from a local about the ancient and spectacular Common Riding that you’ll see tomorrow. 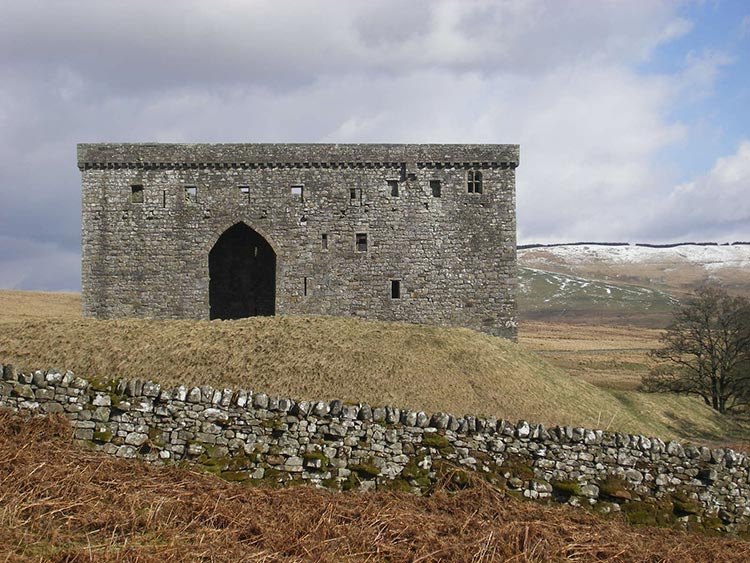 We head up to the Common Riding, cameras at the ready. Lunch stop, then on to visit Smailhom, a classic Border tower-house, where Sir Walter Scott played as a boy the fount of his fascination for the tales of the Borders. Fnally, a stop to enjoy ‘Scott’s View’ across the Tweed to the Eildon Hills before returning to our St Boswells hotel. 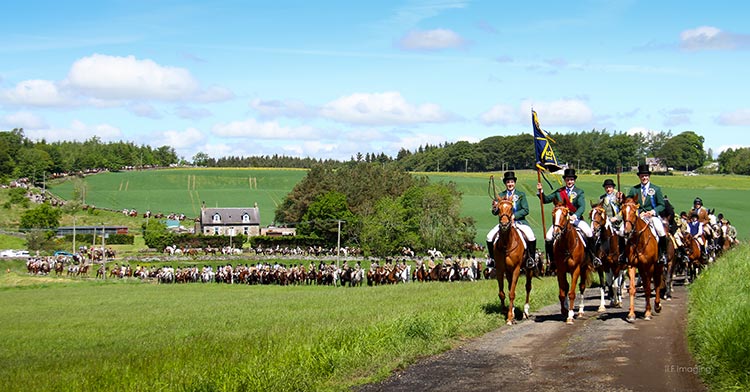 First stop of the day is Jedburgh Abbey, the best preserved of all the abbeys despite being so close to the English Border. Then into Liddesdale, pre-eminent in stories of the Border Reivers. Our road takes us by Teviothead where Johnnie Armstrong was hanged, past Hermitage Castle where Mary Queen of Scots scandalously rode to visit the wounded Earl of Bothwell, we cross into England at Kershopefoot, scene of many a bloody ambush of reiving bands and on to Lanercost Priory.

Rewind 1500 years now, and Hadrian’s Wall is in sight. The Roman Army Museum gives a great overview of what the Romans were doing here, then to extraordinary Roman vicus at Vindolanda home to the oldest surviving handwritten documents in Britain.

That night you’re at a 16th century coaching inn by the English River Tyne.

Takes us back up close to the Scottish Border and a look at the site of the Battle of Otterburn, a Scottish victory largely fought out by Douglases and Percys. Then across to Alnwick and the rambling home of both Dumbledore and the Duke of Northumberland. Plenty time here for lunch and exploring this vast castle.

Mid afternoon we head north to Flodden Battlefield and across the Tweed to Coldstream, following the trail of Lord Home, one of the Scottish commanders at Flodden. That night’s hotel is in the market town of Kelso.

Kelso Abbey and Floors Castle are right on the doorstep so we take a look at those, then up by Greenknowe, an impressive ruined tower-house of the Pringle family. Our last major stop is magnificent Thirlestane Castle, seat of the Dukes of Lauderdale, still occupied by the Maitland family. Then it’s over the watershed to Edinburgh, pausing to see medieval Soutra Aisle on Roman Dere Street on the Lammermuir hills. Stay the night back in our comfortable Edinburgh B&B.

We ask for a non refundable deposit of GBP £400 per person. The balance is payable thirteen weeks prior to the start of the tour.

We strongly recommend that you take out trip insurance in case of unforeseen circumstances. Special arrangements for Covid related cancellations on request. Clans and Castles is registered under the official 'Good to Go' scheme. For more details on our terms and conditions please click here.

We use www.xe.com for our calculations and this means that, at the time of writing:

If you would like to know more about the trip and discuss dates then please send an email to me, Diana Gray.

Once you are ready to go ahead and book a place, you can pay your non-refundable deposit of GBP £400 below...

Note - please use Ref: 'BORD' when prompted and send us an email with names of all in the group and your selected tour, stating if you would like to share a room.

This was the most magical, wonderful vacation ever!!! Thanks to you we had a gloriously-beautiful and educational tour through Scotland. You brought Diana Gabaldon's books to life for us.

The trip was just perfect! Everyone always asks me what my favorite part was, but it all was so wonderful I could never pick just one thing. I have such fond memories, I could go on and on for days. So I'll just say don't change a thing. Once again thank you so much for such a wonderful experience!

Thank you for the holiday of a lifetime! It surpassed all our expectations. Cannot recommend you highly enough.

Thank you so much for our Tour. It was absolutely magical and I enjoyed every minute of it.

Though the tour referred to our itinary, it was so much more. It balanced the beautiful sights wth your knowledge of history. It was a memorable and enjoyable experience. I have traveled Europe before, and your tour ranks among my best experiences.

I had been looking forward to this 'Outlander' tour for a couple of years and your trip exceeded all my expectations! As you know, my husband Pat knew nothing about the books but came along for the ride and enjoyed the tour just as much as I did.

You filled us with stories about Scottish history, clans and the countryside that made Diana’s books come alive for us. Not only did we see the most amazing and breathtaking scenery but you took us to out of the way places that regular tourists would never see.

My tour was a dream come true. A million thank yous for a once in a lifetime experience.

This tour beautifully brought together the dramatic history of Scotland's highland clans with the story of Jamie and Claire Fraser that we all love. With the help of Alastair, our knowledgeable and charming tour guide, the Outlander book characters came to life before us in the castle ruins, heather covered moorland, and Edinburgh pubs. Thank you for a once in a lifetime adventure!

I have been remiss in not having written sooner, but the memory of Scotland and the Outlander Tour will be imprinted in my heart and mind for a lifetime. Although I am a Gabaldon fan, this tour far exceeded my greatest expectations. Your attention to detail brought the history of the Highlands to life in a way I would never have imagined. I was moved by vivid descriptions of battles and personages, castles and outposts and a country and heritage, that although not mine, were both tragic and romantic. This was a great tour that awakened the mysterious charm of Scotland and its people. Thank you!