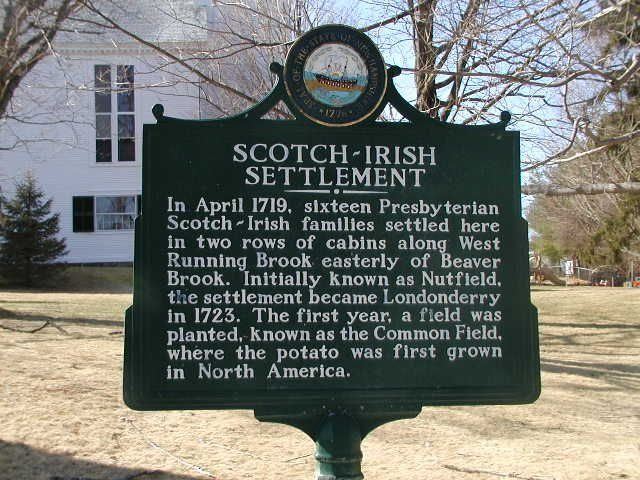 Scotch-Irish ... not a word used in either Scotland or Ireland – you’re either one thing or the other! But it’s common in the USA (especially round the Appalachian Mountains) and refers to Scots who emigrated to Ulster and then on to the New World - thereby creating a genealogical headache for their descendants.

So why this unusual two phase emigration?

England asserted its control of Ireland in the 15th century, Henry VIII proclaiming himself ‘King of Ireland’ in 1541. But Ireland was always a place apart: Catholic, Gaelic-speaking and a clan-based society at a time when Tudor England was Protestant, English-speaking and broadly feudal. Henry’s daughter, Queen Elizabeth, wanted some people she could trust in Ireland and ‘planted’ English settlers in Munster, Offaly and elsewhere. Her successor James VI had similar ambitions and was particularly concerned about the most immovably Gaelic part of Ireland: ... wait for it ...: Ulster!

Ulster was the source of repeated attacks on the English settlement in Ireland until it was finally brought to heel by the defeat of the great O’Neill rebellion in 1603. Four years later, Hugh O’Neill and Rory O’Donnell, the Earls of Tyrone and Tyrconnell respectively, together with about 90 of their followers, left for Europe – the so-called ‘Flight of the Earls’. Their lands were forfeit and this left a vacuum which James VI quickly filled with Protestant settlers from Lanarkshire, Ayrshire and, principally, the Borders.

This was the Plantation of Ulster: a good way both to relocate troublesome Border Reiver families, at the same time providing good fighting men to suppress the native Irish when required. As well as the official Plantation there was also an unofficial plantation, largely in County Down, led by Hugh Montgomery Laird of Braidstane in Ayrshire.

The reaction of the native Irish to the plantation was inevitably negative. An early 17th-century poem by the Irish bard Lochlann Óg Ó Dálaigh laments the plantation and asks "Where have the Gaels gone?", adding "We have in their stead an arrogant, impure crowd, of foreigners' blood".

Another wave of Scottish immigration came in the 1690s, when tens of thousands from the Borders fled a famine. And it was at this early point that Scottish Presbyterians became the majority community in the province.

Then the next phase of mass emigration began. From 1710 to 1775, over 200,000 people emigrated from Ulster to find their fortune in the original American colonies. The largest numbers went to Pennsylvania and from there south into Virginia, the Carolinas and across the South, with a large concentration in the Appalachian region. Protestants were one-third the population of Ireland, but three-quarters of all emigrants leaving in this period.

The border origin of the Scotch-Irish is supported by a study of the traditional music and folklore of the Appalachian Mountains. Musicologist Cecil Sharp collected hundreds of folk songs in the region, and observed that the musical tradition of the people "seems to point to the North of England, or to the Lowlands, rather than the Highlands.”.

The catastrophe of the Great Famine struck Ireland in 1845 resulting in a million refugees fleeing to America. Now descendants of the earlier arrivals began to call themselves Scotch-Irish to distinguish themselves from the newer, poorer, predominantly Catholic immigrants.